I got an e-mail from my best friend this morning. She’s feeling a bit under the weather… again.

While she’s training to be a speech pathologist, Molly spent a few months in an elementary school and is now at a local hospital.

According to University of Arizona microbiologist Dr. Charles Gerba — aka "Dr. Germ" – professionals who serve sick people have an average of 2,620 bacteria per square inch of their workspace, and the average for those who work with kids is almost seven times that.

An MSN Careers article reporting research conducted by Dr. Gerba and his team suggest that Molly, her former school clients, and her current hospital clients could share “viruses, bacteria and other germs” through light switches, elevator buttons, door handles, and even papers. 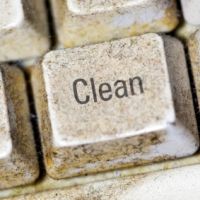 The team’s research was funded by The Clorox Co. and included microbial testing of more than 616 surfaces in private offices and cubicles in Tucson, Ariz., and Washington, D.C. Desktops were thought to harbor more bacteria than any other surface, though phones, computer keyboards, and mice followed closely behind.

The team then compared the bacterial populations of offices of different professions. They found nine with significantly higher numbers than the others.

This list included radio DJs who share their space with many different people, and bankers who handle lots of money.

Lawyers and television producers who meet a lot of people and shake a lot of hands were also listed.

In the article, Gerba mentioned that wiping down your desk, for the most part, simply spreads germs around. He suggests using a disinfectant or sanitizer to clean with. I suggest carefully drying with a paper towel afterward.

And perhaps taking on a Monk-like approach to human contact and personal hygiene.