A 47-year-old Israeli woman crawled feebly to the front door to call for help from a neighbor before passing out. Her partner, also 47, had already fallen unconscious.

FOX News reports that the couple began to feel dizzy after eating a meal of fried blowfish, and could barely breathe when the ambulance arrived. 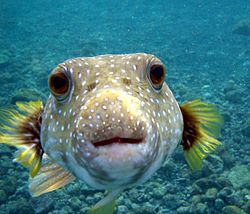 “From what they have been able to tell us,” Rambam Hospital spokesman David Ratner said, “a neighbor gave them the fish as a gift. They didn’t know what it was; they fried it up for dinner and ate it.“

The couple was unaware of the neurotoxins contained in the skin and certain internal organs of blowfish that are highly toxic to humans. Contacting or ingesting these toxins leads to muscle paralysis and can result in an excruciatingly slow and painful death.

Marine biologist Dr. Nadav Shashar said, though the fish is the second most poisonous vertebrae in the world, it is considered a delicacy in Japan and Korea, "but they know how to prepare it."

Dr. Shashar concluded by saying, “The basic rule of thumb is simple: Don’t stick things in your mouth if you don’t know what they are.”