Every generation has it’s version of the Rolling Stones: Aerosmith in the 1970s, Black Crowes in the 1980s, after that, no one seemed to do nostalgia as good as the Stones.

Guess every generation has their version of Susie.

Which is better: wood or plastic cutting boards?

Food packaging is multifunctional: it protects from harvest to table. Four main groups of materials for direct food contact are mentioned in the literature: wood, glass, plastic, and metal. In this review, the focus is on wooden packaging for direct contact with food.

In Europe, wood as a food contact material is subject to European Regulation (EC) No 1935/2004 states that materials must not transfer their constituents to food. Today, wooden packaging, like other packaging materials, does not have a Europe-wide harmonized specific regulation, so member countries legislate at different levels.

Wood has been safely used for centuries in contact with food but is usually questioned because of its microbiological behavior compared with smooth surfaces.

Based on a review of published conclusions from scientific studies over the last 20 y and after a description of the general properties of wooden packaging, we focus on the microbiological status of natural wood. Then, we discuss the parameters influencing the survival of microorganisms on wood. Finally, we report on the transfer of microorganisms from wood to food and the factors influencing this phenomenon.

This review demonstrates that the porous nature of wood, especially when compared with smooth surfaces, is not responsible for the limited hygiene of the material used in the food industry and that it may even be an advantage for its microbiological status. In fact, its rough or porous surface often generates unfavorable conditions for microorganisms. In addition, wood has the particular characteristic of producing antimicrobial components able to inhibit or limit the growth of pathogenic microorganisms.

Microbial safety of wood in contact with food: A review

Channeling my inner Dean Cliver, I had a chat last week with my friend Matt Shipman about cutting boards and food safety. Matt, a science writer, public information officer at North Carolina State University, curator of The Abstract, and all around swell dude, writes:

Anything that touches your food can be a source of contamination and foodborne illness – including cutting boards.

For example, if you cut up a raw chicken, and then use the same cutting board to slice a tomato for your salad, you run the risk of cross-contamination – with bacteria from the chicken being transferred to the tomato. That, of course, would be bad.

And vegetarians aren’t off the hook either. Fruits and vegetables can also carry pathogens (and transfer them to cutting boards).

To reduce the risk of foodborne illness in your kitchen, here are some things you should know about cutting boards.

For a long time, most (if not all) cutting boards were made of wood. But at some point people began using plastic cutting boards. The idea was that they were easier to clean (and sanitize), and therefore were safer.

But in the late 1980s, a UC Davis researcher named Dean Cliver – the de facto godfather of cutting board food safety – decided to investigate whether plastic cutting boards really were safer. Answer: not really. 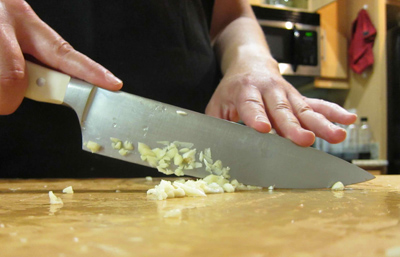 Plastic cutting boards, Cliver found, are easier to sanitize. But cutting on them also leaves lots of grooves where bacteria can hide. Wood is tougher to sanitize, but it’s also (often) tougher in general – you won’t find as many deep scratches in the surface.

In addition, researchers have discovered that the type of wood your cutting board is made from also makes a difference.

“Hardwoods, like maple, are fine-grained, and the capillary action of those grains pulls down fluid, trapping the bacteria – which are killed off as the board dries after cleaning,” says Ben Chapman, a food safety researcher at NC State. “Soft woods, like cypress, are less likely to dull the edge of your knife, but also pose a greater food safety risk,” Chapman explains. “That’s because they have larger grains, which allows the wood to split apart more easily, forming grooves where bacteria can thrive.”

Why use plastic cutting boards for meat? Because of how you wash them.

Cleaning Your Cutting Board

Plastic and wood have different characteristics, so you have to handle them differently.

“This is because chlorine binds very easily to organic materials, like the wood in a cutting board, which neutralizes its antibacterial properties,” Chapman says. “Quaternary ammonia is more effective at killing bacteria on wood or other organic surfaces.”

It’s worth noting that you should also sanitize your kitchen sponge/rag/brush after you’ve used it to scrub the chicken-juice off your cutting board – or else you run the risk of contaminating the next thing you wash (which is the exact opposite of what you’re trying to do).

The last step in cleaning your cutting board is an important one –dry it.

“Make sure you put the cutting board somewhere that air circulates, so that it can dry completely,” Chapman says. Bacteria need moisture to grow, and you don’t want to give them a welcoming environment.

“Historically, butchers used to put salt on their butcher blocks to keep them from smelling bad,” Chapman says. “This worked because the salt drew the moisture out of the wood and prevented bacterial contamination, which is what caused the smell – though the butchers didn’t know it at the time.”

When To Replace Your Cutting Board

At some point, scrubbing and sanitizing might not be enough. When your cutting board has accumulated a lot of deep grooves from repeated use, you probably need to replace it.

“The more grooves it has, and the bigger they are, the more area is available for trapping moisture and giving bacteria a place to proliferate,” Chapman says. In this episode, Ben is absent, but Don is not alone. Mike Batz, Assistant Director of Food Safety Programs, Emerging Pathogen Institute at the University of Florida, is a guest on the show. He appeared not once, but twice on the podcast before.

Don and Mike start by talking a little about their travels, then, they quickly move to a discussion on the Chobani Yogurt recall. The news article leaves Mike unsure whether Mucor circinelloides was pathogenic to both animals and humans. A brief digression about podcast listening speed reveals that Batz listens at 1.5 speed while Don is more civilized. Returning to yogurt, they discuss the originalmBio article. Don concludes the study did not provide enough evidence to show M. circinelloides is truely pathogenic to humans.

Don asks Mike about a psychology experiment done by Facebook where they manipulated users feeds. Mike was disappointed by Facebook’s methodology since the study never requested an informed consent from the users. They then rambled about again about their various and sundry international travels. Mike resided close to the Rijks Museum (that’s in Amsterdam) for a while and Schaffner shared his experience in Finland (including reindeer tartare) and New Zealand (and beef tartare).

Next, they talked about a document from the FAO marketed as providing a list of the top 10 foodborne parasites ). To continue, they discussed seasonal food safety tips. While Mike confessed to not always follow his own food safety recommendations, Don revealed he is reluctant to eat a cut cantaloupe by a stranger.

Soon after, the discussion shifted to antibiotics in meat. Both agreed that the issue is quite complicated and there is not a straight forward answer.

Food safety experts always recommend using two cutting boards, one strictly for meat and meat products and the other for fruits and vegetables to avoid cross contamination. Great advice, now what type of cutting board will reduce microbial counts after cleaning; plastic, wood, or marble?
Ninemsn reports:
Plastic comes a definite last and that’s because bacteria are able to breed in the cuts left by knives.
Marble came in second because bacteria spread everywhere. Marble also loses points because it’s tough on knives.
In the final wash-up, it was wood that blew the competition out of the water. This is no surprise to Professor Cliver. In many similar experiments, wood’s always been a winner.
Leila: "Why is wood so much better?"
Professor Cliver: "It’s a very porous material and the fluid is drawn into the wood by capillary action and if there are bacteria in the fluid they go in and they never come back alive."
Leila: "So the wooden boards kill the bacteria?"
Professor: "Well, they die off slowly. It may take a few hours, but all the same, they aren’t in a position to cause any trouble."
Leila: "So wood’s the way to go?"
Professor: "In my opinion."
But the professor adds a rider — be sure to choose a tight-grained hardwood board. If the wood’s too soft, those pesky bacteria can multiply in deep knife cuts.

I had the opportunity to swab a number of cutting boards when shooting the series Kitchen Crimes, both plastic and wooden boards. Microbial counts were consistently high because bacteria will hide in the cracks and crevices of the board rendering cleaning ineffective. It is important to toss or refinish your cutting board if it appears to be heavily grooved to prevent this from occurring.
Here are some tips on how to effectively clean and sanitize your board:
1. Wash with soap and water using friction.
2. Rinse with warm water.
3. Sanitize using a mild solution of bleach to water, approximately 5mL bleach to 500mL water.
4. Finally allow to air dry for optimum results. However, whenever I use a wooden or plastic cutting board, I pay close attention to the number of grooves I’ve placed in the board from years of chopping and cutting with my heavy hand. It is  difficult to effectively clean and  sanitize such a board and bacteria could be left behind that tend to hide in these cuts.

I analyzed a number of cutting boards (wooden and plastic) during the TV show, Kitchen Crimes, and often found high bacterial counts, including fecal coliform bacteria (1000cfu/gm). Once a board has a number of good slashes, maybe it is time to either refinish or replace the board to reduce microbial lingering and contamination. Always store wooden cutting boards in a dry location to avoid excessive moisture; bacteria like moisture.