My husband just sent me a link with a recipe for some amazing broccoli – The Best Broccoli of Your Life, in fact.

It was a blog post by The Amateur Gourmet, lauding the cooking style of The Barefoot Contessa.

As the recipe for roasted broccoli is relayed, The Amateur Gourmet reveals a secret that the Contessa doesn’t share: 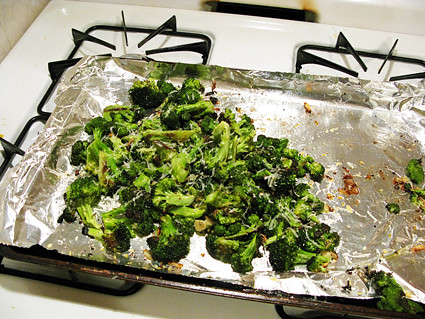 [D]ry them THOROUGHLY. That is, if you wash them.

I saw an episode of Julia Child cooking with Jacques Pepin once when Pepin revealed he doesn’t wash a chicken before putting it in a hot oven: "The heat kills all the germs," he said in his French accent. "If bacteria could survive that oven, it deserves to kill me."

By that logic, then, I didn’t wash my broccoli; I wanted it to get crispy and brown. If you’re nervous, though, just wash and dry it obsessively.

USDA agrees that, "It is not necessary to wash raw chicken. Any bacteria which might be present are destroyed by cooking." Though the temperature is measured in the food – not the oven.

You can be sure chicken is safe if a tip-sensitive digital thermometer reads 165 F in the thickest part of it.

Not much is said about temps for vegetables, though. I vaguely remember the test for ServSafe certification a few years ago suggesting they reach 135 F, but that’s not even out of the 40 F – 140 F “danger zone” and I have no science to back it.

I have seen the science on the internalization of pathogens in some produce and in such cases washing will not make vegetables any safer to eat.

So I might just cook it unwashed. Or I might be “obsessive.” Either way, I’ve got what I need to make an informed decision; it’ll be my choice and not my ignorance that leaves the possibility for pathogens in.