There’s nothing like three inches of freshly fallen Christmas morning snow to make me think … barbeque.

Before firing up the grill in a couple of hours, I now have to consider whether the T-bones I bought at Dillons were needle or blade tenderized, or not. The idea is that small needles are inserted into steak to inject tenderizers. All hamburger should be cooked to a thermometer-verified 160F because it’s all

ground up – the outside, which can be laden with poop, is on the inside. With steaks, the thought has been that searing on the outside will take care of any poop bugs like E. coli and the inside is clean. But what if needles pushed the E. coli on the outside of the steak to the inside?

There have been 6-7 such outbreaks in the past, but only a couple appear to be linked to the consumer issue of – how do I cook this Christmas steak?

The U.S. Department of Agriculture issued a press release last night warning that people in Colorado, Iowa, Kansas, Michigan, South Dakota and Washington were sick with E. coli O157:H7 and the common vehicle appeared to be “non-intact steaks (blade tenderized prior to further processing).” Why the U.S. Centers for Disease Control has not commented on the outbreak remains a mystery.

Minnesota lawyer Fred Pritzker was the first to publicly identify the potential outbreak linked to blade-tenderized steaks a week ago, on Dec. 18/09.

He also explained that in November of 1997, the Meat and Poultry Subcommittee of the National Advisory Committee on Microbiological Criteria for Foods concluded that standard beef steaks have a low probability of  E. coli O157:H7 migrating from the surface to the interior of the beef muscle.

Because of this, the cooking advice was to cook the steak at least enough to effect a cooked color change on all surfaces. Hence, it was officially safe to eat a steak rare.

Except color is a lousy indicator. How about some temperature recommendation, oh holy micro committee?

But the committee limited this advice to “intact beef steak” and then defined the term as follows: “A cut of whole muscle that has not been injected, mechanically tenderized or reconstructed.” Under the Food and Drug Administration’s 1977 food code, “injected” meant “manipulating a meat so that infectious or toxigenic microorganisms may be introduced from its surface to its interior through tenderizing with deep penetration or injecting the meat such as with juices.”

Based on these definitions, USDA’s Food Safety and Information Service FSIS proclaimed in early 1999 that the agency believes there should be a distinction between intact cuts of muscle and non-intact products, including those that have been tenderized and injected.

That was 1999. I don’t see any such intact or non-intact label when I go to the grocery store. Restaurants remain a faith-based food safety institution. And the issue has rarely risen to the level of public discussion.

The issue is not new, but may be new in terms of public discussion. Echeverry et al. wrote in the Aug. 2009 issue of the Journal of Food Protection that,

The researchers found that application of antimicrobials to the steaks prior to packaging and shipment on day 0 was effective in reducing internalization of both pathogens in nonintact beef products stored for both 14 and 21 days.

I hope they’re right. But there’s obviously something going on in the current outbreak.

Oh, and I know it was Christmas Eve and everything, but the USDA press release contained the tired and sometimes true advice for handling ground beef – hamburger – which has nothing to do with intact or non-intact steaks. I won’t be asking Karen anything (ask Karen is the supposed on-line help thingy that USDA keeps flogging).

There are many more details that will emerge as the story evolves, and people more knowledgeable than I — and others — pop up to speak. I’m sorry if you’re spending Christmas barfing because the food safety community did a lousy job providing information about risks that are out there. I’m still enjoying Christmas morning with the family. That’s Sorenne looking out our living room window this morning.

Should have taken the picture last night with seafood surprise (in Manhattan Kansas?) and grandma here, but tonight will have to do: 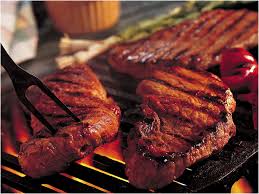 I think it’s funny the way my roommate from India always asks before taking food from anyone if it contains any beef.

If the answer is yes, she tries hard to hide her face of disgust and politely says, “No thanks.”

It is not surprising. Indians consider cows to be sacred and magical, more than what we think of our pets.

I imagine the same reaction in American tourists when scanning the dog section of a restaurant menu during their trip to the Olympics.

The Beijing Catering Trade Association banned dog meat from the Menu of all the 112 designated Olympic Restaurants, to avoid this reaction of dog-loving tourists.

It is a big disappointment for those who were daring enough to try this treat they would never be able to consume in their own countries.

However, it is probably not going to affect the residents, since they don’t tend to eat dog meat during the hot months of summer anyway.

All this fuss about banning dog meat in Beijing during the Olympic season makes me wonder if officers should be more concerned about food safety rather than scaring off a few tourists.

In the end, isn’t killing a dog for its meat the same as having beef for dinner? My Indian roommate would probably agree.

"You’ve got the tender beef, butter, salt, French fries, beer — all your major food groups. But it’s very unique to North Jersey. I go to other places and nobody’s heard of it."

He’s talking about a beefsteak, described by Paul Lukas of the N.Y. Times as a
"raucous all-you-can-eat-and-drink banquet."

The story says that back in the days before cholesterol testing, beefsteaks — boisterous mass feeds featuring unlimited servings of steak, lamb chops, bacon-wrapped lamb kidneys, crabmeat, shrimp and beer, all consumed without such niceties as silverware, napkins or women — held sway in New York for the better part of a century.

The ritual was documented by the writer Joseph Mitchell for the New Yorker magazine in his 1939 article “All You Can Hold for Five Bucks.” As Mr. Mitchell told it, the beefsteak came into being in the mid-1800s, became popular as a political fund-raiser and vote-buyer, and began a slow decline when women started taking part after being granted suffrage in 1920.

Today the beefsteak features slices of beef tenderloin washed down with pitchers of beer, and has migrated from its New York roots to New Jersey.

The events, which typically attract crowds of 150 or more, with a ticket price of about $40, are popular as political meet-and-greets, annual dinners for businesses and civic groups, and charity fundraisers. Caterers said they put on about 1,000 of them in the region last year.

The story says that in 1938  a Clifton butcher and grocer named Garret Nightingale, known as Hap, began catering parties with a set formula.
He grilled tenderloins (the muscle used for filet mignon) over charcoal, sliced them, dipped the slices in melted butter, served them on slices of white sandwich bread, added French fries on the side, and let everyone eat as much as they wanted. This he called a beefsteak. Within a decade, it had become an entrenched local phenomenon.

Hap Nightingale died in 1982. By that time he had passed the business on to his son, Bob, who turned it over to his son, Rob, in 1995. The second- and third-generation Nightingales continue to run the operation today out of an unassuming Clifton house where Bob Nightingale was raised and still lives. Their business office is the house’s cramped basement, and the tenderloins are grilled over hardwood charcoal in the driveway before being taken to the beefsteak venues. From this unlikely command center, the Nightingales catered over 600 beefsteaks last year, going through 88,000 pounds of tenderloin in the process.