Keeping with the aeronautical theme, Belgian broadcaster VRT reports a passenger on a Transavia flight smelt so bad that other passengers started fainting and vomiting after the flight took off from Amsterdam’s Schiphol Airport,. Staff on board the Transavia jet reportedly tried to quarantine him in a toilet before the pilot diverted the flight.

The Boeing 737 is said to have landed in the city of Faro, in the Algarve region of southern Portugal, so the foul-smelling man could be removed from the flight.

A picture taken by one of the passengers claims to show medical personnel taking him from the plane to a bus.

Belgian passenger Piet van Haut described the stench of the man in question as “unbearable”.

He said: “It was like he hadn’t washed himself for several weeks.

“Several passengers got sick and had to puke.”

Transavia confirmed the emergency landing saying it was due to “medical reasons”.

It is not known why the man smelt so bad and what other medical issues he was suffering from.

In February, a Transavia plane from Dubai to Amsterdam was forced to make an emergency landing in the Austrian capital of Vienna after a passenger, who could not stop farting, caused a brawl between passengers.

Watching the kids go through their paces at the end of day-1 training, I was talking with a mom who said, I’ve got to get her gear and air it out. Now that Amy is a hockey player, she also is rigorous about airing the gear and washing the undergarments.

Science may have an explanation.

Leonard Sax of the N.Y. Times wrote last month that the sense of smell differs between women and men. It’s entirely plausible that a woman could perceive an odor which is – for the woman – overpoweringly awful, while a man doesn’t smell anything.

In research published in 2002 in the journal Nature Neuroscience, Pamela Dalton of the Monell Chemical Senses Center and her colleagues exposed men and women to smells in the laboratory. Not just once, but over and over again. Dr. Dalton and her team found that with repeated exposure, the women’s ability to detect the odors improved 100,000-fold: the women were able to detect the odor at a concentration 1/100,000th of the concentration they needed at the beginning of the study.

But the male subjects, on average, showed no improvement at all in their ability to detect the odor.

There are two basic kinds of brain cells: Neurons are considered the most important, because they seem to play the biggest role in sending information via electrical signals. But glial cells are essential too, because they provide structure and may also modulate information processing in the brain. On all counts, women beat men. Women have more cells in the olfactory bulb: 16.2 million cells total in the average woman, compared with 9.2 million total cells in the average man. In 2014 research published in PLOS One, researchers at the University of São Paulo compared the noses of 18 subjects from age 55 to 94 shortly after their deaths. They found that the women had 6.9 million neurons, double the 3.5 million in the men. When they counted glial cells, women again had more: 9.3 million compared with 5.7 million in the men.

The differences in their perceptions could make each feel that the other must be crazy. Was she imagining the smell? Was he lying and pretending he didn’t smell it?

Knowing that the differences in male and female noses can be so extreme, the best approach may be for each family member to agree to respect and trust the other’s report of sensory experiences.

After an investigation revealed a B.C. grocery store changing the best-before date on fish, former Superstore employees have come forward to claim that it wasn’t the first time this happened.

CTV News reports that former Langley Superstore employee Sylvia Taylor claims that changing best-before dates isn’t something new for the grocery chain. She worked in the deli department during the 1990s.

"Part of our duties, as directed by our manager, was to check our meat packages in the display cases for their best-before dates. If they were expired, we were to pull the meats, open up the packages, smell them, and if they smelled okay, we re-wrapped them and put a new best-before date, extending usually by about five days. When we were told to change the best-before dates, I stopped buying any meat products from the Real Canadian Superstore."

Jason Paxton claims he had a similar experience when he worked in the seafood department at the Duncan Superstore.

"Every time the meat was re-packed, the best-before date was changed. The majority of it we could wash off, re-package it and get a couple of more days out of it."

Paxton says he has since told his friends not to shop at Superstore.

Ken Randa of the Canadian Food Inspection Agency says there are no laws against changing the best-before dates on packaged food, adding,

"If they change the best-before date, there may not be anything wrong with it, and maybe no legislative issue with us. Ultimately, they have to answer to you, the consumer.”

Superstore says employee are not allowed to change best-before dates and are required to sign a policy stating as much when they’re hired. The store says they’re also required to review and re-sign on a regular basis.

Of the few websites I have in my RSS feeds for entertainment is, It Was Over When, all about how couples didn’t come to be. From yesterday: It was over when she farted at the dinner table and kept on eating like nothing happened.

Aftermath: It ended the next day after I confronted her about the act. She tried to blame it on my dog.

The Japanese carmaker Mitsubishi has smelled the glove and introduced a new interior package it calls cocochi, in which the upholstery in the PX-Miev incorporates an anti-allergen coating that Mitsubishi says breaks down offensive odours and volatile organic compounds as well as deactivating allergens such as ticks and pollen.

And if fighting farts isn’t enough, each of the PX-Miev’s four seats is air-conditioned to ensure any remaining odours are quickly distributed and dispelled.

The PX-Miev’s obsession with smell doesn’t end there. The air-conditioning system pumps out aroma molecules as well as negative-ion and enriched oxygen to reduce fatigue and enhance comfort.

“Stores slash prices about 50% – 60% on meat when it is nearing the date on the packaging. But, is that food safe to eat?” 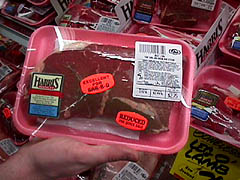 According to registered dietitian Charlotte Caperton-Kilburn, such meat is typically safe to consume as long as you cook or freeze it as soon as you bring it home… and it smells okay.

“If the meat smells even remotely strange it should be returned to the store or thrown away,” Caperton-Kilburn told the news station.

In Ireland, Darina Allen wrote in an opinion piece for the Irish Examiner that, just the other night, she found a vac-packed duck in the back of her fridge that smelled “good and high.” Rather than throw it out, she “gave it a good wash inside and out and rubbed a bit of salt into the skin and roasted it.”

Her guests said it was delicious.

Allen reminisced about life before modern conveniences like electric refrigeration and explained, “We learned from our mothers how to judge with our senses whether food was safe.” She asserted that, “in just a few years, many people have lost the ability to judge for themselves when food is safe to eat.”

While most groceries sold in the US have a date consumers can read and use, the USDA only requires manufacturers of infant formula and baby food to determine and display a “Use by” date on their products—and this is mainly for the sake of ensuring nutrient quality. The others are voluntary and only describe when the food will probably taste best. Assessing safety is still up to the consumer.

Modern technologies like stamped dates and color-changing barcodes can help consumers with that assessment, as can the senses of sight and smell. The most reliable safeguard, though, is cooking to a temperature that studies have found will effectively kill pathogens. For poultry, this is 165F.

Chefs may tell you to use your senses to figure temperature, too, but only by using a tip-sensitive digital thermometer can you know for sure.  It’s the consumer’s choice, as always, but I’d rather be sure than be positive for salmonella.